BYU Student Prank-Calls Mom. She Says to Get an Abortion.

A Reel posted to Facebook by That Was Epic! has gained over 22 million views and has many viewers shocked after a BYU student’s mother advises her son, “Tell her to go get an abortion.”

YouTube creator Juan Gonzalez of That Was Epic! filmed in Salt Lake City recently, stopping in well-known areas like Temple Square and Brigham Young University. Gonzalez is famous for giving away large amounts of cash to people in need, performing social experiments, and pulling pranks.

In the Reel, Gonzalez approaches a young man and offers him $500 to prank call his mom and tell her he got a stripper pregnant. The student agrees and proceeds to call his mom on speaker phone. After explaining to his mother that he got a girl pregnant after arriving at Brigham Young University, his exasperated mother then advises him, “Okay, well tell her to go get an abortion.”

The young man visibly looks shocked after hearing what his mother just said. When he tells her it was a prank call she immediately hangs up on him. Laughing, Gonzalez hands the young man $500 in cash.

You can watch the entire Reel here.

What People Are Saying

The dense comment section revealed the stark contrast between both sides of the abortion debate. Two comments stood out, which had nearly the same amount of likes. The first commenter told the story about her unplanned pregnancy and how “the world is a better place” because she kept her child. She expressed that, though it was not easy, everything worked out for the best. 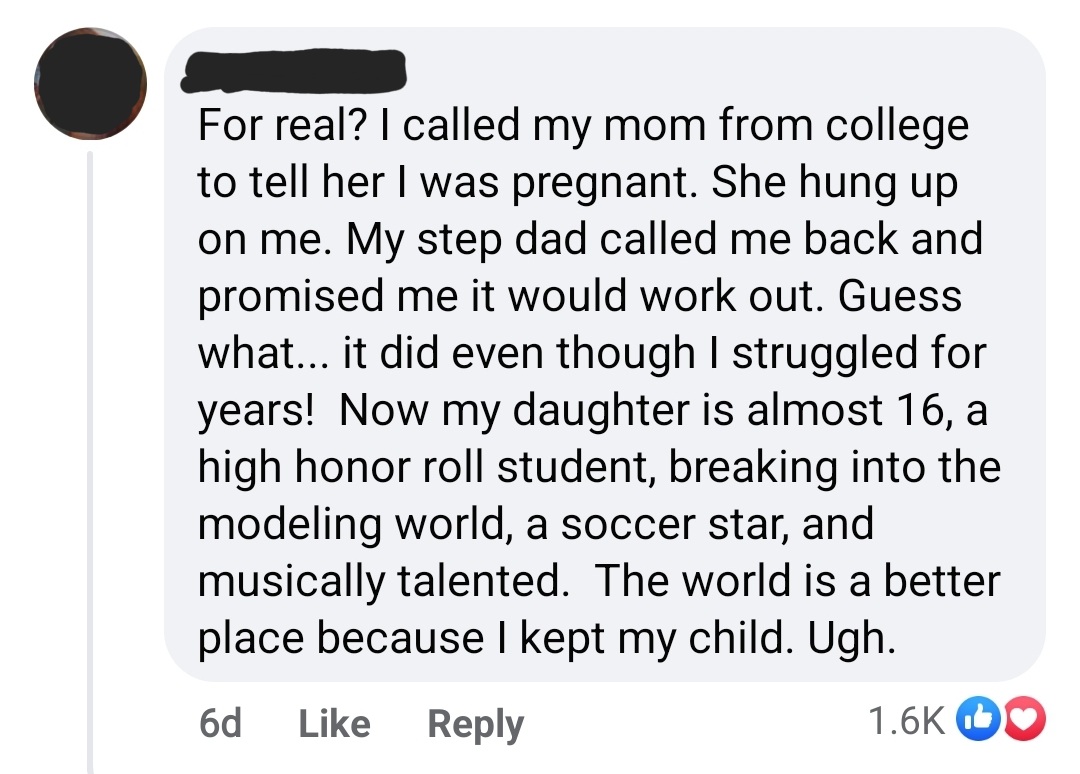 While the second comment supported the mother’s advice stating that they would tell their son the same thing.

But a third comment revealed a perspective that is widely ignored by pro-abortion supporters. The commenter told a heartbreaking story about a friend that had an abortion 15 years ago which left her infertile and depressed. 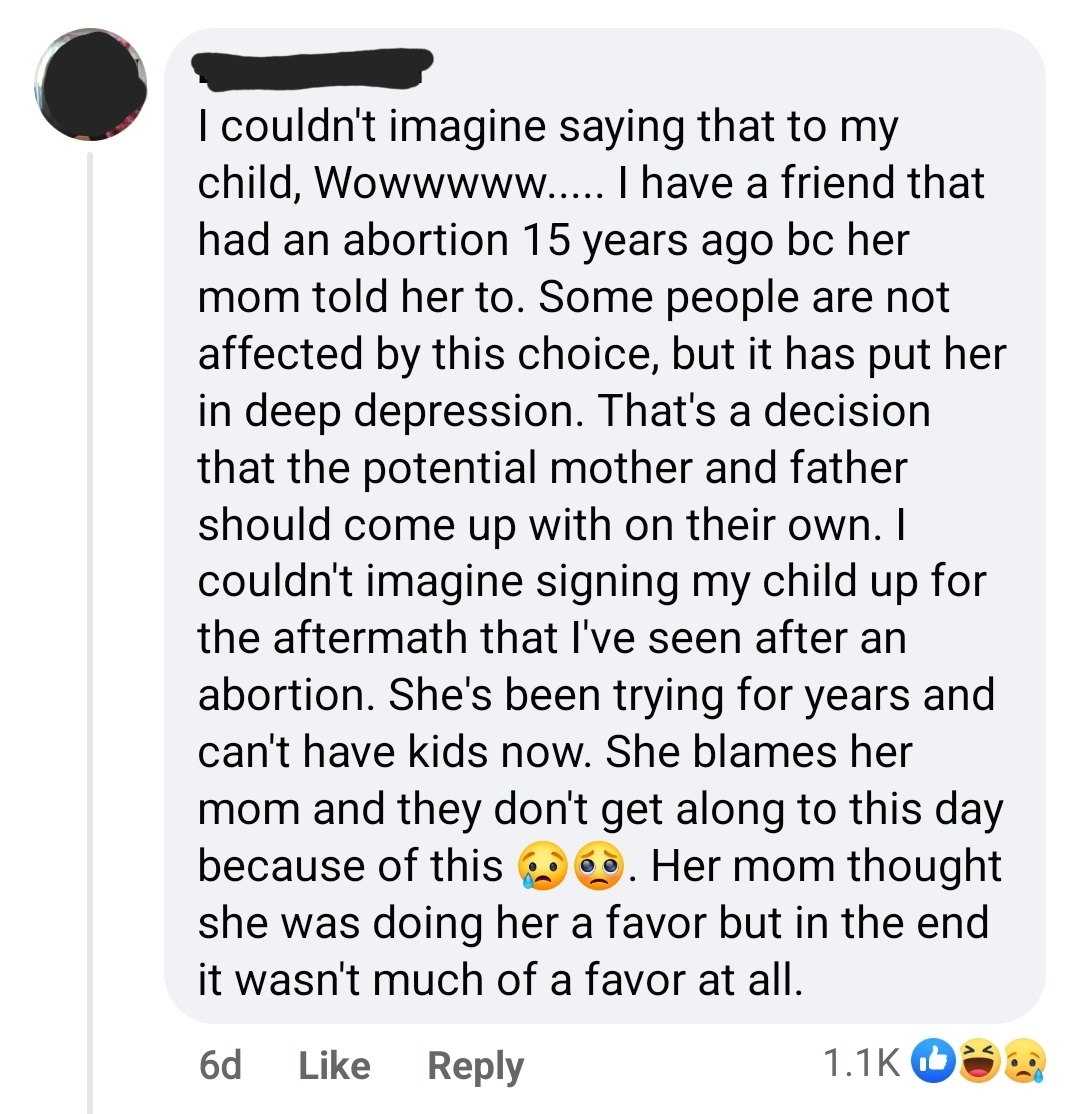 How Did We Get Here?

Planned Parenthood is known to virtually every American as the “quick fix” to your unplanned pregnancy. For nearly 50 years, we have been brainwashed to believe that abortion is not only acceptable but the desirable solution to any unplanned pregnancy.

So are we really surprised when a mother in this situation would answer so quickly to kill her own grandchild?

Of course, one might think that the mother in the video might have had religious roots to motivate her to choose life instead.

We don’t know who that she is, but assuming she is a member of the Church of Jesus Christ of Latter-day Saints, and because it is the predominant religion of the Beehive state, let’s find out what’s going on within the Church, officially and culturally.

Culture Amongst Members of the Church 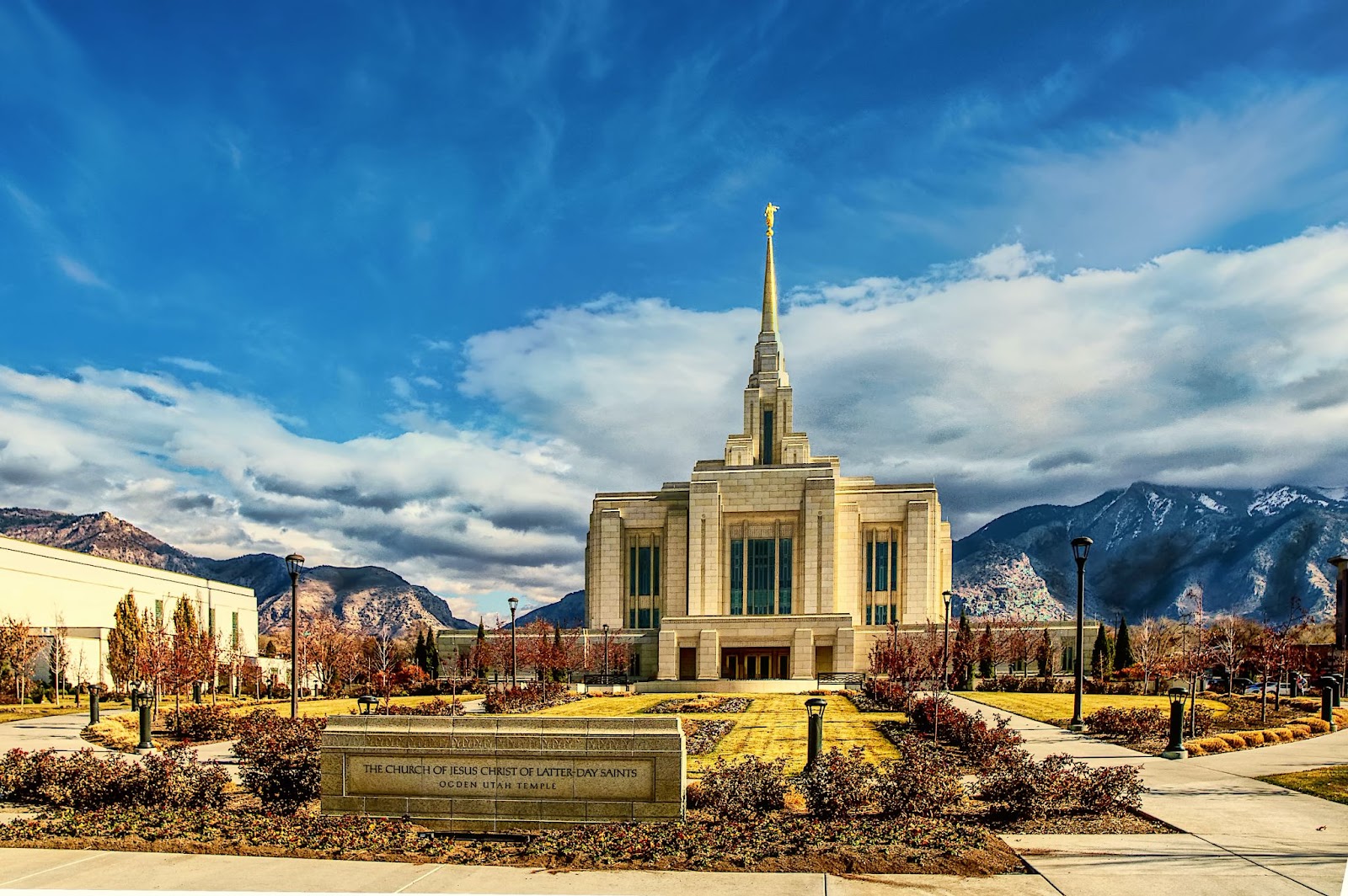 Photo by Michael Hart on Unsplash

The Church of Jesus Christ of Latter-day Saints has long taken a firm stance against abortion. The Church states that it “opposes elective abortion for personal or social convenience, and counsels its members not to submit to, perform, encourage, pay for, or arrange for such abortions.” (Church Newsroom) They do provide potential exceptions in cases like rape, incest, or danger to the life of the mother or fetus, but “even these exceptions do not automatically justify abortion.” In those cases, members are to counsel with their bishop or stake president and to prayerfully consider whether or not abortion is the right decision.

Despite the strong pro-life position from the Church officially, there is a growing trend particularly among women in the Church of all ages (as well as young men) in support of abortion.

Influencers like Julie Hanks, which have posted in support of abortion, have gathered support from female members across the country to the tune of over 38K likes on Instagram. (Read our Julie Hanks article here).

Of the other well-known public figures within the Church, it seems many or most either are in favor of abortion or choose to avoid the topic publicly.

For the official Church’s part, in general conference teachings to the worldwide Church as recent as 2021, prophets and apostles consistently advise women of the church to shun abortion.

“Abortion is an evil, stark and real and repugnant, which is sweeping over the earth. I plead with the women of this Church to shun it, to stand above it, to stay away from those compromising situations which make it appear desirable.” (The Personal Journey of a Child of God, Elder Neil A. Anderson, April 2021)

Since the Supreme Court overturned Roe v. Wade in June of 2022, the abortion debate has only intensified. More and more accounts geared towards “Pro-Choice and LDS” followers have made their way on the internet, boasting “unapologetic” views on abortion.

The culture of the world has creeped its way into the Church, and its members are caught between the culture and the doctrine, the world and the Church—and yes, on this topic, between death and life.

What We Didn’t See

Some parents in the Church are willing to support their families and stand by their doctrine, however.

The above Reel is a short clip from a longer YouTube video posted two months ago. Near the end of the video, Gonzalez asks a young college woman to prank call her dad and tell him that she is pregnant. When the woman tells her father that she is pregnant, he reacts in contrast to the aforementioned mother; he calmly encourages his daughter to keep the baby.

The call ends with the woman revealing to her father that the call was a prank and that she was not actually pregnant. Heartwarmingly, they all laugh, and the dad responds, “That was not very nice of you.”

Our Not-Prank Call to Members

As members of the Church of Jesus Christ of Latter-day Saints, we hope and pray that the members learn the doctrine they purport to believe. We urge members to defend our pre-born brothers and sisters. We hope you will join us in standing up for them, and helping foster a culture of life in our community.

After all, “children are an inheritance to the Lord.” They are a blessing to be celebrated, not a burden or signal of shame.

May we share that message in our homes, in our church meetings—and our Church-funded schools.

Pro-Life Utah is a nondenominational organization. Authors speak from their own perspectives and authorities.

If you want to become a part of creating a culture of life and literally saving babies from abortion, please consider sharing our messages on social media or becoming a donor today. If you or someone you know are facing an unplanned pregnancy, let us help.